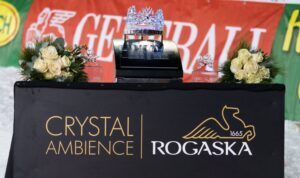 CRYSTAL CROWN FOR THE BEST SKIERS

With its masterpieces made of crystal, Rogaška is present across all continents of the world. Handcrafted masterpieces by Rogaška were given as a gift to a number of state leaders, important businesspersons, celebrities and other influencers. Crystal trophies and prizes are an important part of the top-level sports. It might be of interest to you that trophies for Golden Fox, Planica and Vitranc Cup have been made by the skilful hands of the masters glassmakers from Rogaška. Also in Croatia, which has been hosting an alpine skiing world cup competition since 2005, the best male and female skiers are awarded an original crystal crown.

Rogaška has been handcrafting the trophy for the best skiers performing at Sljeme in Croatia since 2005, when the first world cup competition was organised in Zagreb, called “Zlatni medvjed” (The Golden Bear). At the time, the unbeatable Janica Kostelić was the front-runner, but, to the dismay of the domestic fans, she did not finish the first run. In 2006, the organisers decided to rename the competition to “Snježna kraljica” (Snow Queen Trophy) to honour Janica Kostelič; her world cup wins contributed to the popularisation of skiing in Croatia.

Some interesting facts related to making the crown: